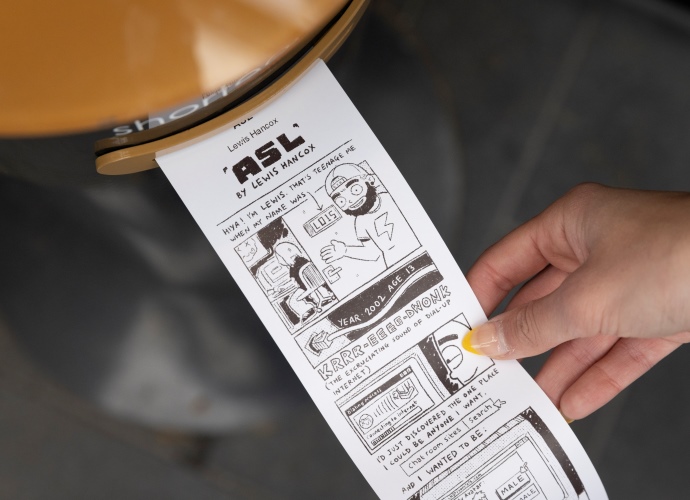 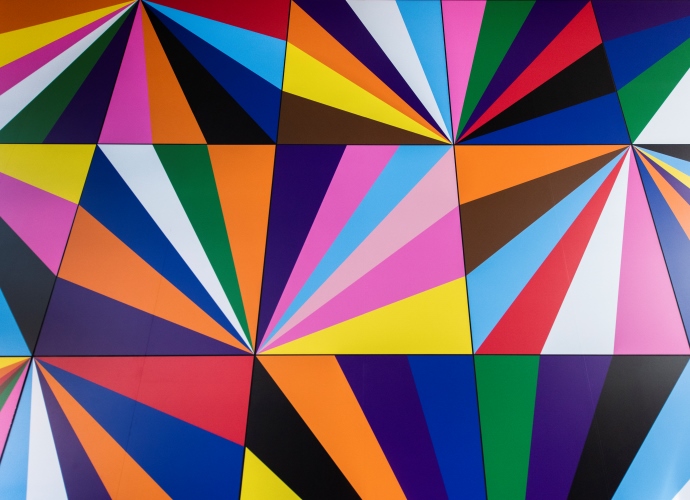 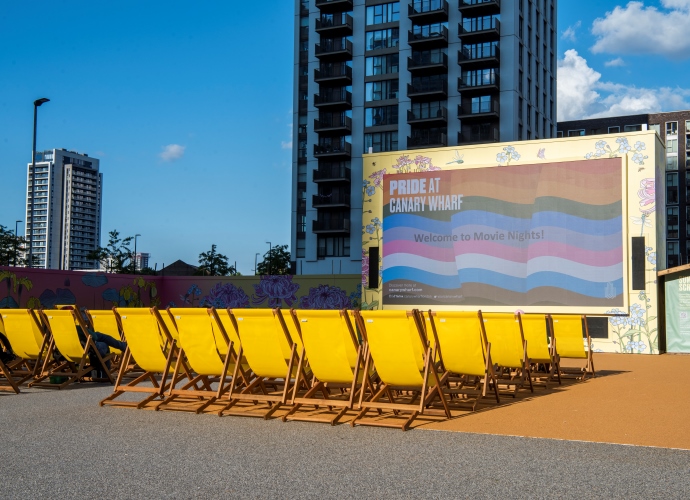 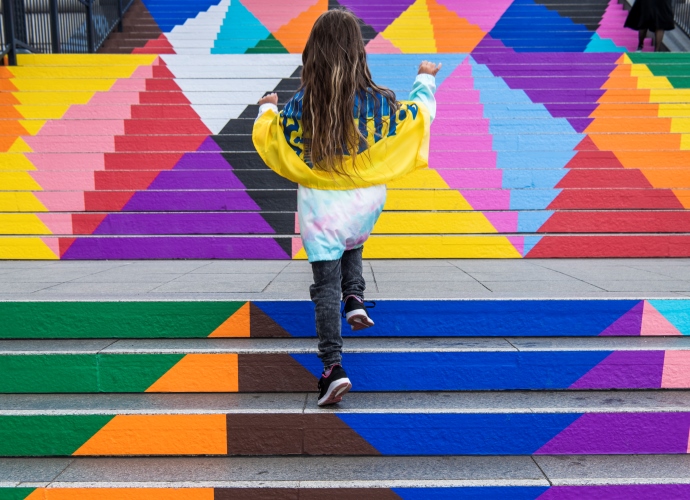 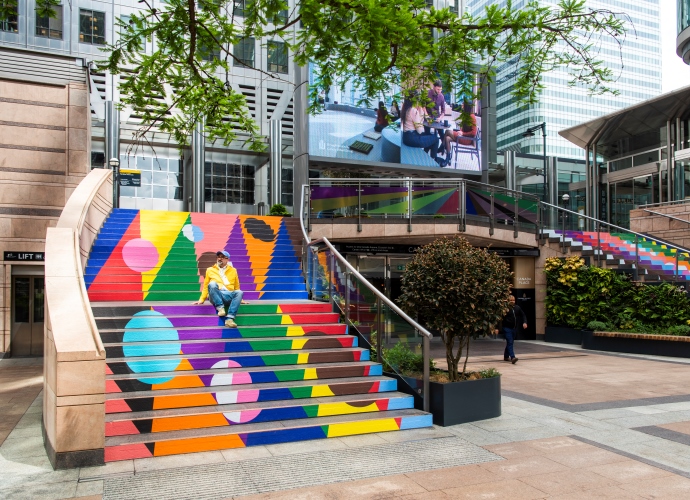 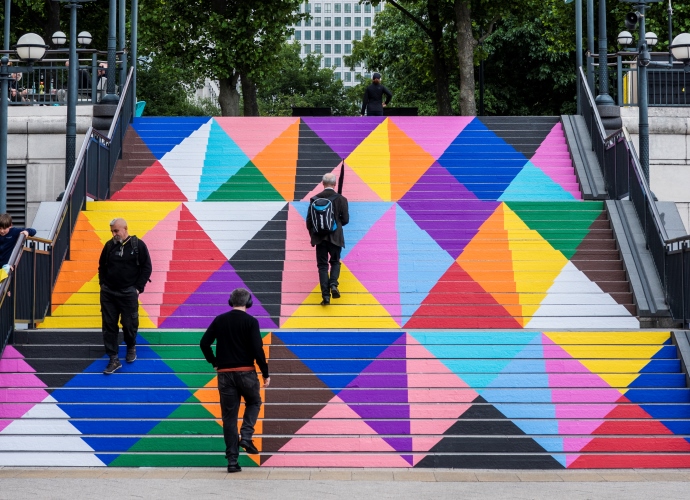 We are delighted to be working with trans artists Fox Fisher and Lewis Hancox who have created 3 special comics which will be available exclusively on our Short Story Stations. These unique illustrations will be available throughout Pride month for you to print for free, take away and enjoy.

Lewis is an influencer, film-maker and author-illustrator. Known for his online comedy characters ‘British Mum’ and ‘Laura Prinny Queen’, Lewis often creates works which aim to entertain whilst incidentally educate.

Our Short Story Stations will house these three special stories until Friday 8 July, press the 1 minute button for an excerpt from ASL, an autobiographical story about Lewis’ troubled teens. Press the 3 minute button for illustrations by Fox about Michael Dillon, a trans man born in London in 1915. Or select the 5 minute button for a piece called Maisie’s Quest a collaborative illustration by both Fox and Lewis.

Movie Nights in Union Square every Wednesday in June at 7pm

Each Wednesday throughout June we will be screening a series of specially selected films. These free films will be shown on our new outdoor Summer Screens in Union Square in Wood Wharf. Settle down in one of our colourful deckchairs, bring your favourite cinema snacks and enjoy your chosen film on the big screen.

*Please note, audience members will need to bring a smart phone and headphones in order to watch the film.

Art Installations at locations across Canary Wharf throughout June

We have commissioned artist Lothar Götz to create three bold and engaging installations for international Pride month. This series of installations are all unique in design, but all celebrate LGBTQ+ culture.

You will find the installations in Crossrail Place by Adams Plaza, on the steps at Riverside and on the steps by Reuters Plaza. Take a tour round all three and enjoy the colourful designs.

In Crossrail Place you will find Electro-Rainbow, a site-specific piece which responds to the giant glass panels that make up the walls surface. The installation takes inspiration from the Progress Pride Rainbow Flag, incorporating them and adapting the stripes into a shifting rainbow of coloured triangles within the square panels. The artist also sees the work akin to the floor of a disco or club, with the patterns and colours dancing across the surface like rays of light on a dancefloor. This provides an echo of the importance of club culture in the development of LGBTQ+ identities.

Jump celebrates movement, responding both to the curving rise of the steps and to the idea of the progression and achievements of gay rights in the context of the LGBTQ+ Pride in London festival.  It also represents the jumps that LGBTQ+ people still have to make in their own lives – of coming out or of jumping over the ongoing hurdles of recognition, equality and acceptance in many environments and social situations.

The artist sees the sets of steps like two grand stairs leading up to a ballroom – like the stairs on which Cinderella ran down from the ball and on which she lost her glass slipper, with the coloured shapes akin to the pattern on a technicolour version of a red carpet.

The staircase is divided into three facetted coloured lozenges or triangles arranged into squares, the colours coming from the Progress Pride Rainbow flag. Gotz imagines the work as a technicolour version of a red carpet, laid out as an upbeat celebration of all the progress made in LGBTQ+ rights – and almost like the colours on a disco dance floor.

The triangular, lozenged pattern also picks up on the forms of the surrounding architecture, visible as you ascend the steps: from the triangular rooftop of One Canada Square, designed by architect César Pelli to the the criss-cross filigree façade of the more recent Newfoundland residential tower designed by Horden Cherry Lee Architects.

In adverse weather events may be cancelled. 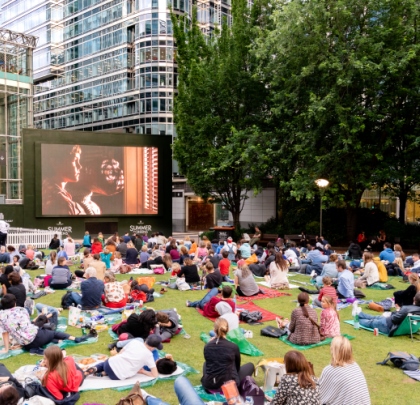